How do you make a Dalek? That was the question uppermost in my mind towards the end of Doctor Who's tenth anniversary year.

The Radio Times had released a special magazine celebrating the anniversary, and this fantastic publication showed you, step-by-step, how to build a Dalek. Inspired, my best friend and I determined that we would do just that.

First problem: What exactly is fibre-glass? We had never heard of it. Was it like Isopon, we pondered. A quick price check and we realised that to buy enough to make a dome would exhaust our meagre resources.

Time for some lateral thinking. What is dome-shaped, but is strong (our completed Dalek was going to have to live in the garden as there wasn't room at 't garage)? Ah-ha! (Image of light-bulb above head.) If we got one of those old ball-hoovers, then the casing might just work. Several visits to local jumble-sales later and we had a strong metal Dalek dome.

The instructions suggested using wood to clad the shoulder section, but we had no wood, so how about metal again? We raided some roadside skips and found some thin aluminium sheets which worked perfectly. Next, the superstructure. A stream flowed beside our school, and in it appeared a huge lump of plywood-cum-blockboard that had, in a previous life, been a hoarding for a building company. We joyfully fished it out and lugged it home.

This fortuitous find provided the five circles we needed to build the basic structure: base, top of base, bottom of shoulders, top of shoulders and bottom of neck. In order to get all these pieces out of one sheet, we had to make everything taper a little more than the instructions said. Still ... we were nearly there.

Little by little, our Dalek took shape. Casters were nicked from supermarket trolleys. The eye-stalk was a toilet ball. The sucker arm was, imaginatively, a sink plunger. The welding on the exterminator arm was impossible until a friend of my Dad's offered to do it for us. We couldn't get any fine mesh for the neck section, but I found a sheet of clear perspex which had fine criss-cross wires imbedded in it. The wooden balls to form the joints for the arms were a problem so we made do with old tennis balls until we could get the real thing - finally obtained from a shipwrights.

All that remained were the half-balls for the skirt. Have you ever tried to buy large polystyrene balls? It 'aint easy. Luckily, my Dad worked as a printer for the Daily Express and he noted that the plastic caps that came in the ends of the massive rolls of paper were about the right size. They weren't domed, though, and so we created little papier maché domes on the tops of these circular caps. Finally we had a complete Dalek.

It looked great, especially when it was painted midnight black and luminous orange. It subsequently starred in several super-8mm films and Tolworth was alive with reports of a dodgy-looking Dalek blocking the traffic and patrolling the streets. 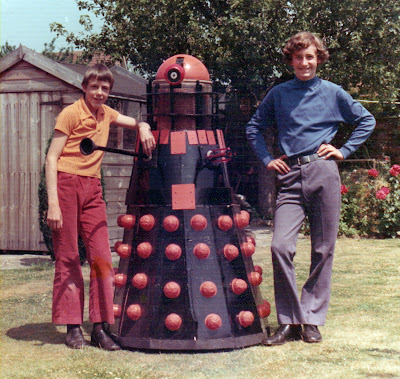 Ultimately, time took its toll on our creation, and like Frankenstein we had to let it die. It survived over ten years, spending most of it slowly disintegrating under a tarpaulin in the garden. Finally we regretfully decided that it had to go for good, and it took pride of place on a stately pyre in my dad's garden.

As the flames licked ever higher, I swear I saw the battered eyestalk shudder and move to regard me balefully. I must have been imagining it because shortly, my beloved hand-made Dalek - the only full-sized one I have ever owned - was reduced to so much ash and cinder.