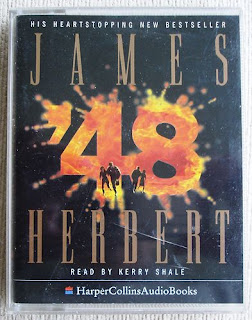 ‘48 was the big new novel from James Herbert in 1996, and was an apocalyptic tale of an alternate history in which Hitler managed to wipe out most life in Europe using the blood plague which left only a few unaffected survivors scavenging a living.

The novel followed the exploits of Hoke, an American, in his attempts to outwit a group of fanatical blackshirts who have determined to use his blood as a cure for their fatal condition.

The novel is fast moving and exciting and Herbert wrings every ounce of tension out of the page. Unfortunately, in the abridged audiobook, Kerry Shale totally fails to capture any of this tension. He sounds as though he is simply reading a book, rather than telling a story, and his attempts to deliver the different voices (including those of two women) are pitiful and distracting.

This is a mere shadow of the novel, a poor half-way house that really does the book no favours. Some books are meant to be read, and ‘48 is one of them.