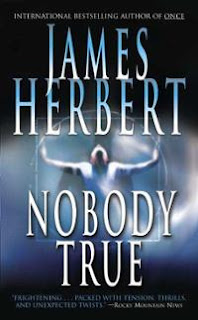 ‘I wasn’t there when I died’ … so starts Nobody True, the latest horror/thriller from the pen of James Herbert. Once again Herbert has pulled the proverbial rabbit from the hat and has come up with a simply superb novel, which manages to be both intriguing and horrific, whilst still containing as much emotion and feeling as can be wrung from the subject.

Jim True runs an advertising agency, and feels that all is well with his life. He has a gorgeous wife and daughter, the company is doing well, and he and his partners are looking to expand the company. However Jim has a secret, and this is that he can travel outside his body at will. During one of these sessions, he returns to find that his body has been slaughtered by persons unknown.

Being an incorporeal spirit has its advantages though, and Jim starts to investigate his own death, finding a serial killer into the bargain, and ultimately being involved in a nailbiting chase to save his own family from the same fate. It’s superb stuff, well written and totally engaging. On the minus side, there are a couple of scenes where Jim listens in to the police investigating the case which come over as something of an info-dump. I guess there was no other way that the information could be imparted to Jim (who is the first person narrator of the book) but the scenes stand out from the rest of the book, which is uniformly excellent.

I loved the initial idea that a soul remained after the body is dead, but then the plot starts to twist and turn and Jim finds he can animate newly-dead corpses to carry out his plans. The serial killer is one of the most horrific and nasty characters I have yet seen in print, and the whole book is entertaining and thrilling in all the right ways.

There is a reason why James Herbert is Britain’s number one bestselling horror writer. Herbert consistently touches a mainstream theme in his writing which eludes other authors, and the deceptive simplicity of his plots allows for character development and motivation as well as simply a cracking good read.

This is another classic from Herbert, on a par with his recent novels Others and Once…. On the evidence of this, Herbert is on a roll and I’m looking forward immensely to see what he can chill us with next.