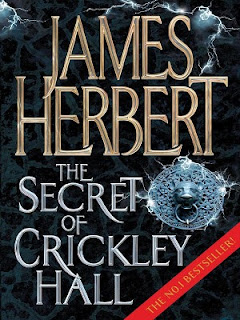 THE SECRET OF CRICKLEY HALL
By James Herbert
Published by Macmillan
600pp £17.99 h/b

James Herbert’s books always guarantee a great read with some tremendous shocks and scares along the way. Earlier ghostly epics from Herbert include Haunted and The Ghosts of Sleath but The Secret of Crickley Hall manages to equal them in the spookiness stakes as well as being genuinely unsettling and nasty. It’s about a family, Gabe, his wife, Eve, and his two young daughters Loren and Cally, who move into the eponymous Hall on a temporary basis. However the ancient pile has ghostly secrets. It seems that during the Second World War, a group of children was evacuated to the Hall and placed under the care of Augustus Cribben and his sister Magda. However Augustus was a sadistic masochist with a taste for severe punishment, as well as indulging in a spot of self flagellation, and during a flood in 1943, he and all the children perished.

Of course the truth behind the actual events of that night become clear as the novel progresses, and Herbert manages to juggle all his characters deftly, introducing a psychic, Lili Peel, and a ghost-debunker, Gordon Pyke, both of whom have significant parts to play. The haunting is really well handled, with mysterious banging coming from a cupboard, and the cellar door refusing to stay closed. Even the appearance of the ghosts is terrifying and raises goosebumps on the skin – this is one book you won’t want to read on your own in a deserted house.

As always, Herbert has delivered a novel which chills and horrifies in equal turns. Fans of earlier works like The Dark and The Fog won’t be disappoined, as Herbert has some wincingly painful fates in store for some of the characters. The Secret of Crickley Hall is a spinechilling ghost story, laden with atmosphere and a creepy, effective read.