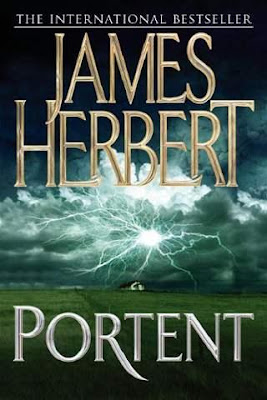 James Herbert is the undisputed master of British horror, and his latest novel Portent has just been published. David Howe met with him to find out more.

The last time I spoke with Jim, Haunted, a tightly structured English ghost story, had just been published. ‘Haunted was going back to the old theme of haunted houses,’ he explained. ‘Having pushed the genre forward with my earlier books, I wanted to go back and say that the old, traditional stuff was still great. I wanted to experiment with those themes and I’m glad that I did as Haunted went straight to number one in the hardback bestseller lists and was very well received.’

Following Haunted came Creed, a lighter and more tongue-in-cheek novel. You can see in Fluke perhaps the earliest indication that there is a lighter side to Jim’s writing, being the somewhat charming and often whimsical tale of a man who wakes up to find he is a dog, and who then has to discover why this should be. Creed has a similar lightness which makes for a very enjoyable read. It concerns a sleazy paparazzo photographer named Joe Creed, who finds himself up against a group of fallen angels who live in an old folks home.

‘Creed was another complete change of style. It was my way of saying “let’s not take this genre too seriously”. There are some writers who get very serious and defensive about the horror genre and I wanted to simply relax a bit and have some fun. With Joe Creed, I wanted a hero who was an absolute scumbag. Not just an anti-hero, which has become rather clichéd. I wanted someone I could just have fun with, someone who, if he was scared, would faint! The readers went along with me and, like Haunted, it did very well.


‘Although I was very satisfied with the way Creed came out, three of the national papers gave me the worst reviews I’ve ever had in my life! All those newspapers dislike horror intensely, but because of my sales figures they reasoned that they had to give me some attention. They picked up Creed having heard the word-of-mouth reputation from my first books The Rats and The Fog, and they simply didn’t understand it. They didn’t realise that it was meant to be funny, a gentle piss-take if you like. They couldn’t see that at all. I met the literary editor of one of the big Sunday papers recently and I asked how she felt about some of the books she was being so rude about in her column. Her reaction was that she loved to rip them apart as it was her job. I feel sorry for critics who cannot read books for enjoyment. They all feel they have to do some big hatchet job and are looking to do that before they even open the covers and start reading. It’s criticising for criticising’s sake which rather defeats the object.’

Whereas Creed is somewhat light-hearted and humourous, Portent is one of the most ambitious and wide-ranging novels the author has attempted to date.

‘I first had the idea for Portent while I was in Australia promoting Sepulchre. I was driving down this long avenue lined with beautiful pink-blossomed jacaranda trees. The PR lady I was with explained that the students hated the blossom. It was a sign of terror for them because it meant that their exams started in two weeks time and they knew they had to buckle down and do some work. That sparked off the idea that there could be something beautiful and breathtaking but which was a sign of something evil and bad.

‘I’d also wanted to do a book about the environment for a long time. The thing that gets me to this day about the environment is that people have become very complacent because of all the campaigns and publicity. I don’t like being preached to and yet I think that something has got to be done about it. I’m not a great campaigner but I try and do my bit by planting trees. I’ve planted about fifty trees in my garden, and each tree apparently makes up for the pollution caused by one car. I’m not fanatical about it, but it’s something I think we should all be concerned with. I’m lucky in that I write books which are read by a lot of people, and if I can draw my readers’ attention to what is going on around them, and make them think, then maybe something will have been achieved.

‘I started researching into natural disasters and was amazed at how many disasters happen week after week. Now when you start collecting these things and putting them together, you start to see how horrendous it really is. I wanted to build on all these things. If all these earthquakes, tidal waves, hurricanes, volcanic eruptions, storms, cyclones and the like all happened at the same time, on the same day, can you imagine the chaos? I think I’ve got a reputation for mayhem and chaos from some of my earlier books, so imagine the whole world going at once ... it’s quite a thought.’

Portent is full of effective descriptions of natural disasters. How much of it was taken from real life and how much was invented?

‘Most of the disasters are genuine, but of course I’ve taken their consequences a bit further. One or two possibly wouldn’t happen, like, for example, a sandstorm in China burying a whole city, but that’s one of the few extremes. Everything that happens in the book, can, and on occasion does, happen. As to why all this is going on, there are three theories in Portent. There’s a genuine one from Professor James Lovelock, who really exists. His theory is that the Earth is a single, living, organism that sustains itself to exist and eradicates anything that upsets its own balance and mankind has upset the balance. To complement this, I have another - invented - theory from a geophysicist called Hugo Poggs. He also believes that the Earth is a living entity, but that it exists to sustain mankind. That difference forms the schism between himself and Professor Lovelock and that’s why they parted company in my fictitious universe. There is also a third theory, which I call the James Herbert theory, and you’ll have to read the book to discover what that is.’

Portent actually echoes the structure of Herbert’s earlier books in that the main plot is counterpointed with descriptions of disasters and fatalities along the way. ‘That was my style for a long time and here was the ideal opportunity to resurrect it. It allowed me to describe a huge world disaster in very intimate and individual terms.’

The use of these vignettes also gives Herbert the scope to write from a number of different viewpoints and as the settings and people change, so too does the style and rhythm of the writing, leading to a refreshing mix of characters and cultures.

‘I’m pleased that that aspect came across, because that was the intention. I really enjoyed writing and researching those scenes; I’ve travelled quite a bit, and although I haven’t been to all the places I describe, I don’t think that you can tell those I haven’t been to from those I have.’

I suggested that Portent was actually a science fiction book, and Jim agreed. ‘A number of my books have been as much science fiction as horror. Think of Domain: a future London ravaged by the bomb, think of The Fog: a cloud of chemicals which drives people insane. Yes, Portent is science fiction, it’s horror, it’s supernatural, but it’s also mainstream, and that, I think, is the important thing. To be successful you have to be read both within and outside the horror genre.’

As well as Portent, there is also a book about James Herbert available. This is James Herbert: By Horror Haunted, edited by Stephen Jones. Both this and Portent are remarkable for the quality and care which has gone into their production, and Jim feels strongly about this aspect of publishing.

‘I like to give the reader value for money,’ he explained. ‘Books are expensive and I want my readers to get a good package. Things like the little “light over the Earth” graphic through to the typeface and the inclusion of Chief Seattle’s Testimony at the end of Portent, all of these add to the look and feel of the final book.

‘I’m also very pleased with By Horror Haunted. Obviously I had a hand in it and I think Steve Jones did an incredible job. I hope people feel it’s value for money. I was a bit dubious about having a book about me, but as Steve says, there’s forty about Stephen King. Fans of the genre seem to really like that sort of thing.’

For the immediate future, Jim is currently working on two projects very different from his novels.

‘There’s a coffee-table book called Dark Places, which is a photographic collection featuring some of the locations that I’ve used in my novels plus other spooky places in England: burial places, churches, old houses, things like that. I’m writing the foreword and the introductions to each section. Roderick Brown is the editor and the black and white photographs have been taken by Paul Berkshire.

‘There’s also a graphic novel underway, some of the storyboards for which can be seen in By Horror Haunted. It’s called The City, and has been written and storyboarded by myself and illustrated by a brilliant artist called Ian Miller. Ian’s work is absolutely incredible and I am very pleased he is working on this project.’

For the moment Jim is not working on another novel. Next year will see the paperback release of Portent, but Jim wants to ease up a little on the pressure of producing a novel a year.

‘I’m constantly being told that I’m a workaholic, and unfortunately because I like what I do it’s very easy to get that way. I do need to take more breaks. I don’t like holidays, but I should take them. I really don’t know what the next novel is going to be! I have four ideas all on very different themes and I’ve got to sit down and look at them and decide which one to do. Of course I may just get a completely different idea out of the blue and decide to go with that instead. Who can say?’

Perhaps all we can say is that, once again, we should expect the unexpected from Britain’s most popular master of Horror.
Posted by David at 16:58