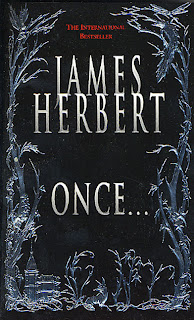 There is always something special about a James Herbert book … as a writer he is constantly reinventing himself, defying critics to place him in a niche as one type of author writing one type of fiction. As he says himself, he writes what he writes, and more often than not, the results are enjoyable, entertaining, and satisfying – exactly what one might expect from someone who hits the top of the best-seller lists with every book he writes.

Thom Kindred returns to his childhood home following an accident which left him easily tired and slightly lame. There he finds that things have not really changed, and the cottage he is staying in brings back many memories. However his childhood friend Hugo has a problem: Hugo’s father is sick and dying, nursed by the startlingly attractive Nell Quick. When Nell starts to take an interest in Thom, his suspicions are aroused, but soon Thom finds himself distracted. He sees creatures with wings and shedding light: faeries. He is captivated by one such human-sized creature, and soon Thom starts to discover that his past is not all that he believed, and that he has a strange affinity with these beautiful and alluring creatures.

I really enjoyed this novel. Like many of Herbert’s books it’s an undemanding read, yet draws you in and captivates you. The plot is straightforward, and the characters are interesting … all told an excellent read. But Herbert always goes one step further, and the packaging of the book is also superb. It’s currently available in two hardback editions: one with a black cover and one with a white cover. Moreover both editions feature a number of superb colour plates by artist Steve Stone, as well as numerous elves and faeries drawn by Bill Gregory and Herbert himself. It all amounts to a lovely package from a master storyteller.