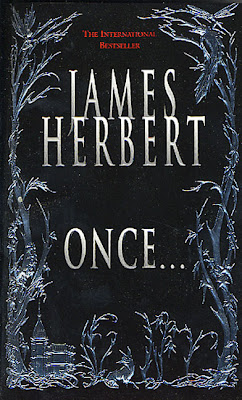 What’s that you say? James Herbert, master of all things horrific and terrifying, is writing a story about faeries? Well … yes. But anyone who knows Herbert’s work should immediately realise that this sort of change in style is what typifies his writing: no two books are the same, and yet all deliver an impressively honed package of thrills, suspense and horror.

It was a dark and stormy evening I met with Herbert to discuss his latest book. The clouds boiled ominously overhead, and the air was heavy with the expectation of later rain. An ideal atmosphere to chat to the man who since The Rats in 1974 has produced a steady stream of top notch horror tales, making him one of the most popular and consistent best-selling novelists in the UK.

‘It’s very hard to shock any more,’ he states, ‘because we’ve done it. We’ve done it all. So many of the horror movies these days rely on gross-out for their thrills. When you work with words as I do, in a way it’s easier because you’re relying on the readers’ imaginations, but in film you can’t really scare the hell out of people any more which is a shame. But it’s why I go more for suspense and good stories. My publisher asked if they could call my books “chillers”, and I really don’t mind what they call them – I just write what I write.’

And what Herbert has written in Once… is a faerie story.

‘For years I’ve wanted to do a book about faeries,’ Herbert reveals. ‘My favourite film of all time is Snow White and the Seven Dwarfs, the Disney cartoon, because it fulfills all my needs. It’s a romance, it’s humourous, it’s also very dark – there’s a lot of horror there, and it’s also composed of brilliant artwork. Everything I like and appreciate is in that film, and as a result I’ve always wanted to do a book about faeries. Arthur Rackham did some drawings of faeries which were very sensual, they wore gossamer gowns, were heartachingly pretty and so on. There’s also a witchcraft aspect that lends itself to horror … But I could never get a hook on it. Then, a couple of years ago, I read a very serious tome on faeries and elves and this explained that there are actually three kinds of faeries. There are the very tiny ones, little sprites or “Tinkerbells”, and then there are the taller ones: the elves, goblins, the gnomes, and finally there are almost human-sized faeries, about five foot tall. It just clicked into place in my mind: a beautiful faerie, female, sylph-like, slanted eyes, curly golden hair, who falls in love with a human being. And that was it, I was off. I didn’t have to think of a plot or anything, the whole thing just fell into place. It was magic.

‘I researched the subject and decided I needed a magical castle, an isolated cottage somewhere, and if you look in the book, there’s a small piece of artwork of the cottage in the book at the start of each chapter. That was taken from photographs of a little place I discovered and stayed in up in Shropshire. A red sandstone walled, really magic little cottage. I found this place through a company that specialises in strange and obscure holiday venues, and they sent me a brochure of different places and this was among them: a kind of tiny faerie castle. People have been asking me exactly where this place is, but I can’t tell them as it would be unfair, but it does exist.

‘With the faerie idea and the location, I really got hooked and the result was Once….’

Herbert’s previous novel, Others, was a far more gritty read, involving shockingly deformed humans – adults and children – and a conspiracy to hide them away from public view. ‘That was a hard subject for a book,’ says Herbert. ‘it really turned my stomach, and it was tough to research and then write about these poor forgotten and deformed people. This new novel is in many ways a reaction to that: to write about faeries, love and sex rather than gross deformity and death. It was a huge relief to do something like this: this is not a light, frothy book, I hasten to add, but it’s a far more enjoyable subject.’

One of the keynotes of Once… is its blatant eroticism. The pages are heavily imbued with a promise of heady sex, and for once Herbert does not shy away from the challenge that this presents.

‘There was one point in the book where the hero has to meet the most horrific thing he can think of, and I went into the publishers to talk about the project, and they asked me what this thing was going to be. “I don’t know,” I said, “I haven’t got to it yet.” But thankfully when I did get there, the answer to this question had come to me … but it was touch and go for a time.

‘I also had a lot of fun writing it, and there are elements and references in there simply because they amused me. For example, the last words before the epilogue in the book, said by one of the characters, are “Expect me”, and if you remember the film The Wizard of Oz, well Margaret Hamilton, the actress who played the Wicked Witch of the West in that, when she was signing autographs for kids, would write “Expect me” after her name … which is really sinister, and so I’ve used that as the last words in the book. There are lots of things like that: the faerie who falls in love with the human is herself becoming more human, and I mention that she’s not the first faerie to do this, that there’s an Icelandic singer who everyone thinks is slightly mad, but this is only because she can’t come to terms with becoming more human … I have a lot of little chuckles with myself in the book.’

As usual with Herbert’s books, he took a personal interest in all aspects of the design and look of the finished item. ‘I want people to enjoy my books as a nice item – they’re not cheap to buy and I want people to feel they have their money’s worth. I want them to keep them. With Once… I put my heart and soul into the book, in the text and then in the design. We’re doing the book in two jackets: there’s one which is all black with embossed black designs on, and another which is all white with silver highlights on. It’s going to be interesting to see which one sells best. We’re also doing a very limited edition of the book, with a wood bark cover, embossed with a flower design. It’s being made somewhere in the Philippines. The paper is going to be old antique yellowish paper … it should be wonderful.’

In addition, there are small hardback editions available from airports – these don’t have dust jackets, but are particularly nice editions of the book, and again come with a black or a white cover.

‘I did a rough for the cover, and an artist called Bill Gregory, who has been working on my books for years, did most of the black and white illustrations. However we could not find anyone to do the little elves that appear in it. Everyone we approached came up with greetings card-type elves with big eyes, so I ended up drawing them myself. There’s a cheeky one at the end that I’m quite fond of.

‘I wanted the book to look like an old fashioned children’s book with illustrations, but strictly for adults. There are a series of colour plates as you read through which are meant to come as a surprise. I wanted them to make the book look like a children’s story, and as far as I know, this is not done that often in adult books these days. I was pleased that the publisher went with the idea as it’s quite expensive to do, but it’s a real bonus, and it makes the book that much more special.’

Having written about faeries, and having researched the subject, I wondered if Herbert had come to believe in them himself. ‘As with all my writing, I speculate. While working on the book I met a lot of people who do believe, including one of the artists we were talking to, a talented chap called Brian Froud. He was suddenly called away to work with Disney on a film, so had to pull out of this project.

‘I don’t necessarily believe in them, but what if … who knows, who knows?’ He smiles wryly. ‘I’ve just bought some more land around my house, and part of it is a small wood. In the spring, I went down there walking and the ground was completely covered with bluebells. The birds were singing, there was no traffic noise, just peace and light and colour … it was so magical, and you could easily imagine faeries or other strange beings living there. Of course my pragmatic side, from my London East End background, won’t allow me to believe in them implicitly, but it would be nice if it was true.’

As usual, Herbert is not resting on his laurels. ‘I’ve got ideas for the next three or four novels,’ he says. ‘There’s a very interesting one coming next, it’s got a great title, and I’ll probably be writing it in the first person. I won’t say it’s a brand new idea, but it’s certainly new to me, and I don’t think anyone’s tackled it as I’m going to.’ Other than that, Herbert won’t be drawn on other details.

‘I did promise my wife I’d take a year off, but that didn’t happen as usual,’ he says, deftly changing the subject. ‘And the other week in Brighton I walked into W H Smith’s and bought all these jumbo pads and Pentels and stocked up for the next book. I’ll be having a couple of week’s break and then work starts again.’